Starting and running a company in 2021 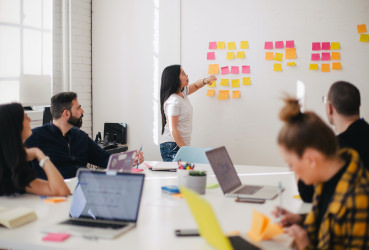 We started Unordinal in December 2020 with the first person joining the company early in January 2021. We’ve now been running for a couple of months, so we just wanted to share our experience in starting a company at this time.

When the business was still on the drawing board, one of the USPs for the company’s way of working was that remote work was going to be promoted to attract people that wanted to shape their own business and personal life relation. Needless to say (but I am going to say it anyway), the uniqueness of that proposition has faded… but the idea still stands, so we’ve started the company without a physical office, and everyone is working from home.

A fun (?) fact about Unordinal is that most employees have never met in real life after three months of working. Even signing employment contracts have been digital! Thank you all who is working on e-signing, it truly works 😊

Given that we set up for remote work from the beginning, recruiting internationally was a no-brainer. So far, we have one person living in Germany and one non-Swedish-speaking person from Portugal, but living in Stockholm as employees. We believe that going internationally at once is a major plus to recruitment in the next couple of years. Competition on the recruitment market in Stockholm is fierce! There are a lot of great companies out there looking for developers…

Building culture takes effort. We noticed after a couple of weeks that after the morning stand-up, we lacked natural contact points during the rest of the day and it felt a bit unnatural to schedule coffee breaks, so instead we scheduled internal game tests. This is both part of a feedback loop on the development work, and part of building something to talk around socially. It is natural to extend the game test into a bit of social talking afterwards.

Back to the office situation! A couple of weeks ago, we were super enthusiastic about getting an office. It’s a good time to go office hunting, it’s still a buyer’s market, and looking at the broader picture, most companies probably are going to keep their space or decrease, not increase. We found some good candidates ranging from posh offices super central in Stockholm, down to short term leases due to impending demolition…

After we had found a good office candidate and negotiated rent and details, we stopped dead in our tracks. This was mostly due to the basic question being somewhat unanswered: What do we need an office for? How much will we use it?

When we asked around in the team, how many days a week they thought they would spend at the office, most said 1-2 days a week top. In that case, should we schedule a specific day and have an empty office 3-4 days a week? Not very economical really. Also, having a specific day booked each week might not fit everyone (this is a new way of thinking, 2 years ago it was obvious that an employer could mandate 5 days a week of physical presence).

Also, our line of business with game development requires big development rigs, so we need to double up on equipment for both the office and home if we decide we go for an office.

The first part of the question though, what do we need an office for? We feel that we are lacking some social touch points, naturally knowing what’s happening in your life? How’s the family? And new pet projects? We also feel that we miss out on spontaneous creative discussions – they happen in meetings as well but not as often as we think they need to happen.

Our current path forward is to book conference spaces a couple of days per month and gather the company.

Socializing? We have arranged virtual “afterworks” (AW) (Swedish for staying after work and having a drink and talking a bit). We are a gaming company, so we have centered our AWs around playing coop games together. They are hard to find for 8+ people though. We’ve played “Among us”, “Fall guy”. The benefit of being a company with creative people, we’ve also looked at personal game projects. Great fun! We have also run some quizzes to get something to center the talk around, using Kahoot, where the previous winner gets to design a new quiz for the next AW.

That is a little touch down on where we are currently! Looking forward to the next three months!

Making a multiplayer game is exciting! Producing something enjoyable to unite people across the globe pushing forward a lot of developers…

A short interview with Unordinal’s founder and CEO Erik Åkerfeldt. We thought it would be great for you to know us a bit better. We hope you enjoy! (PS: Lighting is…

We believe that the next generation of Video Games are Social and Cross platform. The games will bring entertainment over years…